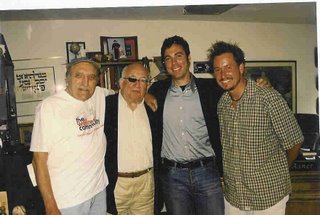 The best Bar Mitzvah shorts ever.

After I completed my short, about a relationship between a boy and his grandfather before the boys bar mitzvah, I tried to look for several other Bar Mitzvah shorts and to try to tie them together and distribute them as : "The best bar Mitzvah shorts DVD compilation"
I found two more shorts, one don at USC one done at NYU. I also found one done in Argentina.
I started interviewing famous celebs for the opening of the DVD about their own Bar Mitzvah experience.

It almost worked out. Problem was there was so much skepticism around us, that I realized that even thought it's a great idea, it's time had still not arrived. I moved on , sadly, realizing this project, which could have touched many worldwide, will not see the light of day. Legendary Actor Ed Asner was one of the famous celebs who told us a hilarious Bar Mitzvah Story.

Today I found the picture I got with him, and the star of my film Len Lesser, known to most as Uncle Leo from the hit TV show Seinfeld after we interviewed Ed.

One of the hardest things for an artist is to see a labor of love, that gatekeepers aren't letting it reach an audience.

Anyways, I guess I'll have to wait and keep on dreaming.