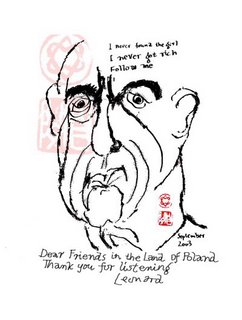 My favorite artist !
Well now that I've had my blog for a week, I feel old enough to finally look back and remember those who have influenced me. I've been lucky to meet lot's of artists in my art life.
Touring the film festival circuit
around the world, I've met quite a lot of them.
some famous, some yet to be famous. Some - has been famous.
A few artists I've met , very few to be exact, gave me some limited insight into the human condition.
Many gave me nothing but a headache listening to their vain ego.I'm still waiting to meet the artist that has been the most influential on me.Leonard Cohen.

I've heard his songs hundreds of times and still haven't figured out why they move me so much. There's something in his lyrics that is just so haunting. The more I listen to them, the more insight I seem to get about them. As the years have gone by, I've noticed that my understanding of them have only deepened.One never seems to outgrow Leonard's songs. It's wierd, as his songs aren't from my generation. They're older than me, and that has always made me wonder what that says about me. Am I an old soul ? Am I disconnected from my era?

Someone emailed me this drawing Leonard did.
I loved the title :

I never found the girl.
I never got rich.
Follow me.

Ladies and Gentlemen. Mr. Leonard Cohen in a nutshell.

Perhaps I should adopt that as my moto.

At least for this week. 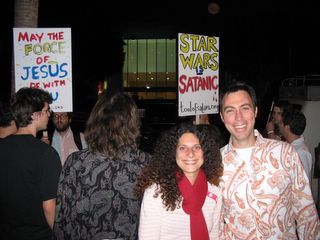 Who would have believed that even STAR WARS would have its protestors. Signs like : STAR WARS IS SATANIC, MAY THE FORCE OF JESUS BE WITH YOU. Why do people have to find enemies everywhere- even in a sci fi chidlrens film ? What is the solution ? censoring everything? Why are people so bored as to fight even a popular chidlrens film ? Alex, my British friend visiting town to work on her show about extreme life in America, seemed more shocked by the anti Star Wars protest than the hundreds of Star Wars fans in costume. Life in LALA LAND continues. Am I starting to blend in treating both the people in costumes and the angry protestors , as part of the general show? One of the highlights of the evening- two people with anti Star Wars signs and huge crosses started shouting at a young lady dressed like Princes Leah. Then as the argument heated up, a guy dressed like Dark Vader came to her support and started shouting at the protestors. Go figure. Life , as one teacher once told me , will always be more dramatic than anything in film. 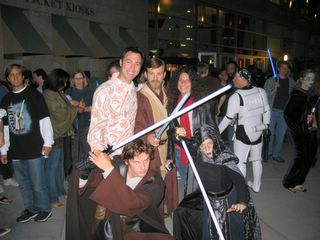 I finally found a few missing pictures which I thought I lost somewhere in my computer. So for prosperity's sake, I've decided to put them online. My friend Alex was in Town, came all the way from the UK to work on a documentary about American phenomenoms. Since Star wars was about to open that night at the cineramadome, I invited her to join me to watch an interesting American phenomena. Hundreds of adults dressed in Star wars costumes were waiting outside the cinema to be among the lucky few to share the first screening with fans of the last episode (for now. ) Yet then we encountered a protest, which made me wonder , is there anything in the world, that is uprotestable ? (see the following picture for more.)

So as I'm learning how to blog and all, I decided to see if any other blogger ever mentioned me. After all, writing is basically gossipping, either about real or unreal things. All gossippers also care if people are gossipping about them.
So I came across a blog from Texas, nevertheless, and it has a really cool summary of my film.
Here's the link.
Enjoy.

Israeli documentary to air at NT
Showing followed by discussion with Director
Lyndsay Knecht/Laura SandiferIntern/Daily Reporter
November 09, 2005
When Israeli filmmaker Dan Katzir was 23 years old, he had done his time as a soldier and was ready to become a lover. But as demonstrations raged and bombs continued to drop while the area struggled to settle in peace, a relationship became nearly impossible to protect in the trenches.
Katzir recorded the private and public battles from his perspective of Israel in the ’90s to make a documentary that is now considered one of the most important in Israel’s modern history.
“Out For Love ... Be Back Shortly” was shown today at 6 p.m. in the Radio, Television, Film and Performing Arts Building, room 184. Katzir led a discussion following the screening, which was co–sponsored by the NT Jewish Studies Program; Department of Radio, Television, and Film; department of history; College of Arts and Sciences; The Consulate General of Israel to the Southwest and the Jewish Federation of Fort Worth and Tarrant County. Admission was free.
Although the documentary is best known for its footage of the Israeli-Palestinian conflict, Katzir said that the film was primarily about love, and he started filming in hopes that he would find a girl.
“I was looking for a girlfriend,” Katzir said. “I wanted to meet women. All artists want to meet women.”
His documentary portrays three subjects: the man, the woman and the country. Katzir, the man, struggles to tell his girlfriend, Iris, that he loves her as emotional obstacles surface in his life due to the Israeli-Palestinian conflict.
One obstacle is Iris’ draft into the Israeli army. Katzir, who served in the army years before, discovered quickly that he harbored negative feelings toward war and the army life.
“The conflict always interferes with my love story,” Katzir said.
Katzir filmed a memorial held in honor of Yatzhak Rabin, prime minister of Israel until 1995, who was assassinated by a Jewish right-wing extremist to the shock of Israeli citizens.
Although his girlfriend felt comfortable in the militant atmosphere, Katzir expressed unease for his safety, even though a mass of soldiers armed with automatic rifles surrounded him.
“These rifles cannot protect me from guns and bombs,” he said.
A French soundtrack plays throughout the movie, adding to the feeling of romance dictated by the filmmaker.
After the film, Katzir said the Israeli-Palestinian conflict is not much different from the conflict between the United States and Iraq.
“You don’t know what should happen to solve the problem, but you know that something should be different,” he said.
A telling study of war’s inherent impact on young lives born of unrest in Israel, the message of “Out For Love ... Be Back Shortly” is one of few political films endorsed by both the right and left of the state‘s political arena. The documentary won 13 international honors and a nomination for the Israeli Academy Award. High schools, universities and the army have adopted Katzir’s story as a channel for educating students and soldiers on the cultural implications of war and peace in Israel.
Beloved by a people desperate for an end to terrorism, Israeli Prime Minister Yitzhak Rabin made celebrated progress toward Arab-Israeli relations. Despite Rabin’s negotiations with the PLO to expand Palestinian self-rule, violence still blisters the canyon between Israelis and Palestinians. Rabin was assassinated by an Israeli law student with ties to right-wing extremist groups just one year after winning the Nobel Peace Prize in 1994.
Katzir’s own political background lends insight to his plight. His great uncle Efraim Katzir was the fifth president of Israel, and he bears relation to Moshe Sharet, Israel’s second prime minister.
Katzir said the peace process is like “making a movie… one step forward, two steps back.”
He said he hopes that someday peace will settle in Israel and the rest of the world. But noting that it has been 10 years since his documentary and Israel still hasn’t seen peace, he believes that it will take time.
“Israel is the only democracy in the middle east,” Katzir said. “Usually, democracies among democracies can find a solution. I don’t think anything will change until our neighbors have democracies by the people, for the people.”
- February 23, 2006 No comments: Links to this post 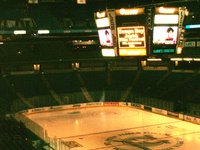 In the picture : "Today You are a Fountain Pen " screened at the Tampa Bay Lightning Hockey Arena.

Hello World.
You won.
I've finally decided to join the twenty first century. Today I am a blogger.Just got an email that my short film :"Today you are a fountain pen" won the audience award at the Tampa Jewish Film Festival.
So much for all those nay sayers who have been skeptical of my art and especially this film. The film opened the festival. Opening night was at the Tampa Hockey arena in Florida. The film screened on the huge screens above the ice. It was the coolest screening I've ever been to with this film. It was also the coldest screening ever.I guess the meaning of art for me, today is to continue doing your thing, and learn to believe in yourself when everyone else stops believing in you.So for all of you out there who believe all those morons who tell you, you're no good. I have only one thing to say. They're wrong.One day, when I retire from filmmaking, I think I'll make T-Shirts. I want a shirt that says :"Don't listen to them. They're always wrong !"
XOX
Dan
- February 23, 2006 1 comment: Links to this post