Actress producer Daniella Albin just completed her new script titled HOME and started collaborating with Dan Katzir and New Love Films on it's screen adaptation.
The film is an Israeli romantic comedy that will be shot in NYC and Israel. The script is scheduled to be shot late 2011 and the film will be released in 2012.
Currently New Love Films and Daniella Albin are in negotiations with several companies on it's production.
- November 22, 2010 No comments:

Sounds of war, the new documentary by Yael Katzir, produced by Katzir productions and New Love Films which will also handle distribution is nearing completion.

Sounds of war takes a personal view on the Lebanon war through the eyes of world class musicians who were invited to study music on the border between Lebanon and Israel.

Sounds of war is a very touching and moving film about art during war time and the meaning of music as a way for dialogue between people.

This article was just published in newspapers around the world. Once again the specter of Kozo Akomoto, the terrorist who killed my grandfather returns to haunt. This saga will never end for me or for anyone who was part of that terror attack that left so many families without their loved ones.

Here's just one of many articles from the Washington Times. I chose this newspaper not because it's the longest or most inclusive but purely cause it was the first one that appeared when I googled for this new development.
I couldn't read other articles. It annoys me to much.

A federal court has found North Korea guilty of aiding terrorists and has fined Pyongyang $300 million in connection with a 1972 terrorist attack in Israel.

However, it is unlikely North Korea's totalitarian regime will recognize the U.S. court's decision and pay the fine.

"North Korea's demonstrated and well-known policy to encourage, support and direct a campaign of murder against civilians amply justifies the imposition of punitive damages against it," Judge Francisco A. Besosa of the U.S. District Court in Puerto Rico said in a ruling Friday.

Noting that North Korea's "budget for the export of terrorism is not known," Judge Besosa said the court would adopt the "typical punitive damages award of $300 million."

The lawsuit was filed by the family of Carmelo Calderon-Molina, a U.S. citizen who was killed in the attack at Lod Airport, now known as Ben-Gurion International Airport, in Tel Aviv.

Mr. Calderon-Molina died trying to protect a pregnant woman. Another U.S. citizen, Pablo Tirado-Ayala, was injured in the May 30, 1972, attack.

The attack was carried out by the Japanese Red Army (JRA) and the Popular Front for the Liberation of Palestine (PFLP) with material support from North Korea and North Korea's Cabinet General Intelligence Bureau.

Mr. Calderon-Molina and Mr. Tirado-Ayala were among a group of Puerto Ricans who had traveled to Israel on a pilgrimage of Christian religious sites.

Three JRA members, who had arrived at Lod Airport from Italy, took automatic weapons and grenades from their luggage and began shooting into the crowd at the terminal.

Twenty-six people were killed and more than 80 wounded in the attack.

Two of the terrorists were killed by self-inflicted wounds; a third, Kozo Okamoto, was overpowered by an airport employee.

During interrogations by Israeli authorities, Okamoto admitted that he and his fellow attackers were JRA members and the attack had been carried out in conjunction with the PFLP.

Okamato was convicted in an Israeli court and received a life sentence. He was freed in 1985 as part of a prisoner release, and is believed to be living in Lebanon.

Bruce Bechtol, a professor of international relations at the Marine Corps Command and Staff College, served as an expert witness in the case.

"The evidence was overwhelming," Mr. Bechtol said in a phone interview. "A lot of this was about closure for the families, and accountability. This is just the beginning."

Families of dual U.S.-Israeli citizens who were killed or injured in Hezbollah attacks on Israel in 2006 also have filed a lawsuit against North Korea.

"This suit is being brought against North Korea because it built the tunnels and the underground facilities for Hezbollah that enabled it to attack Israel during the 2006 war, and because North Korea also supplied them with the rockets that they used," Mr. Bechtol said.

North Korea did not defend itself in the case, and repeated attempts by The Washington Times to contact the North's mission to the United Nations in New York went unanswered on Monday.
- July 22, 2010 No comments:

Just came back from Northern California where we were filming all week our new documentary: FLOWER POWER.

Filming is in high gear and we have already partnered with LUCK FILMS, Willie Nelson's production company which is very exciting.

We have also teamed up with Lati Grobman, who is executive producing this film with us. Lati Grobman's latest film - Righteous Kill was an international hit, teaming up the two mega stars- Robert De Niro and Al Pacino. The two haven't worked together for many years and many fans of the two were eager to see the two of them together again and weren't disappointed.

Like many filmmakers I've also got into the new DSLR craze and just purchased my Canon 5D. One of the frustrating things is the lack of information out there for documentarians about this new technology. So to help the five people that look at this blog, I've decided to share a little bit of what I've learned as I'm learning it.
I've already had a few shooting days with this camera with phenomenal results and I do urge filmmakers on a tight budget to purchase this camera as the quality and the ability to shoot it low light make it an ideal candidate for making docs.

The disadvantages are:
1. Sound
2. Price
3. More technical knowhow than just shooting on a simpler prosumer camcorder -

The ability to get images that are superb and the abiliity to shoot in low light with very little light compensate heavily for the hassle of building a system rather than purchasing a camera that has it all.

Anyways, more about this camera and what I've learned about it in the next blog.
- June 21, 2010 No comments: 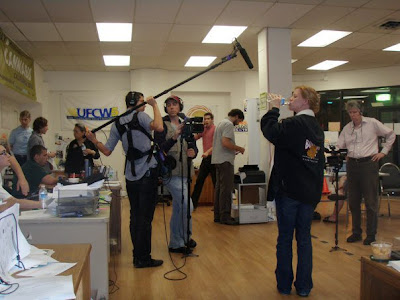 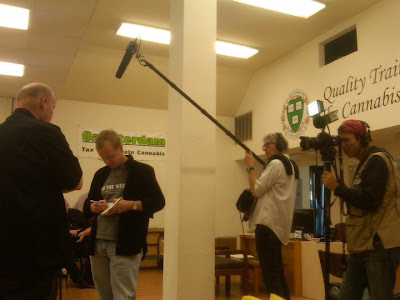 Like many filmmakers I've also got into the new DSLR craze and just purchased my Canon 5D. One of the frustrating things is the lack of information out there for documentarians about this new technology. So to help the five people that look at this blog, I've decided to share a little bit of what I've learned as I'm learning it.
I've already had a few shooting days with this camera with phenomenal results and I do urge filmmakers on a tight budget to purchase this camera as the quality and the ability to shoot it low light make it an ideal candidate for making docs.

The disadvantages are:
1. Sound
2. Price
3. More technical knowhow than just shooting on a simpler prosumer camcorder -

The ability to get images that are superb and the abiliity to shoot in low light with very little light compensate heavily for the hassle of building a system rather than purchasing a camera that has it all.
- June 21, 2010 No comments:

Once again, the memories come back to haunt my family as the images of Kozo Akomoto the world wide infamous terrorist glorify newspapers worldwide.
This time it's due to a new legal case against the government of North Korea regarding her side in the case. Here's more from Haaretz/Herald Tribune Sun., February 14, 2010 Shvat 30, 5770 :

By Zohar Blumenkrantz
An Israeli human rights organization is filing a lawsuit against North Korea over a 1972 terrorist attack at Ben-Gurion International Airport that left more than 20 people dead and over 50 wounded, Haaretz has learned.

The attack, known as the Lod Airport massacre, was carried out by three members of the Japanese Red Army on behalf of the Popular Front for the Liberation of Palestine. The victims included 16 Christian pilgrims from Puerto Advertisement


While two of the terrorists were killed over the course of the attack - one of them committing suicide - the third, Kozo Okamoto, was captured and sentenced to life in prison.

Okamoto was subsequently released from Israeli prison 13 years later, in 1985, as part of the Jibril prisoner exchange deal - one of the 1,150 security prisoners released in exchange for three Israelis captured during the first Lebanon war.

The lawsuit against North Korea stems from claims it sponsored the PFLP and the Japanese Red Army, providing material support to both organizations and assistance in planning the attack. The three terrorists arrived on an Air France flight from Paris and drew automatic guns and hand grenades, firing randomly at anybody in sight once their luggage came through the baggage claim.

"This attack was for Israelis what the September 11th attacks were for Americans," Ze'ev Sarig, the former manager of Lod Airport, explained in his testimony before a judge in Puerto Rico. "The attack changed how we viewed security at the airport and in Israeli civil aviation."

Nitsana Darshan-Leitner, the founder of Shurat HaDin - Israel Law Center, filed the $30 million lawsuit at a U.S. federal court in Puerto Rico on behalf of 12 of the victims' families.

Preliminary hearings to examine evidence began in Puerto Rico on December 2, 2009. Israeli experts - including Sarig and various experts on terrorism - were flown in to testify at the hearings. The claims were then translated and transferred to North Korean authorities which, according to Darshan-Leitner, have yet to respond to the charges.

"We are currently waiting for the ruling of the federal judge in Puerto Rico," she said, adding that it might be possible to seize North Korean funds held at U.S. banks if the verdict comes out in the claimants' favor