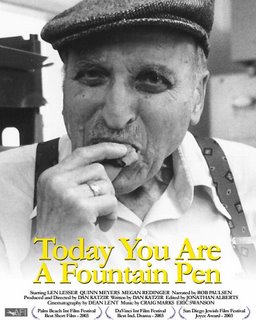 So my short film : "Today you are a fountain pen" was selected to competition to the Moondance Film Festival 2006.
This year Moondance moved for Colorado to Los Angeles. It was an amazing festival at Raleigh studio.
TIME magazine had an article about the up and coming festivals in the US and this was one of them. A festival to watch.

Seems that my short still has life in it, and that Len Lesser ("Uncle Leo" from the hit TV series Seinfeld) great perfomance still touches audience.

People keep telling me that no one is interested anymore in works that are to innocent. The world has moved on and is looking for more cynical and jaded stuff. But somehow, it seems to me that my innocent and naive work keeps finding new audiences and lasts the test of time .
Who's right - those who say that innocence is gone, or those who love innocence?
The most bizarre comment I've heard is that the world is much less innocent today than it was in the fifties...
I say- in the fifties, people came out of WWII. Twenty million people died. Some in death camps, some in labor camps, some in ghettos. Many in horrible deaths, in Thailand, China, Europe...
All hell broke out in that war- and some of the ugliest sides of humanity came out- so how could one blame those living during and after it of being naive?

Perhaps we are the ones living in naive times? We who have seen so little of the ugliness of the human soul, try to force ourselves to go to the dark side of the moon to see what's there.
But no matter how much we try - as most people, especially in the western world, and in the US live a very sheltered lives, they just can't grasp what evil really means.
Thus they want more cynical and jaded films, as it connects them to something they really haven't seen.

So much for my two cents about innocence.