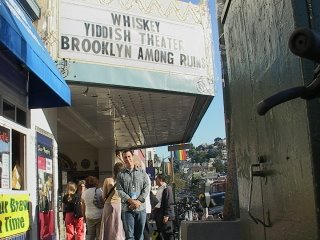 Finally an official US premiere for the Yiddish Film. We were very fortunate to have it at the San francisco International Jewish Film Festival.
The largest Jewish Film Festival in the world.
The first screening was at the Castro theater, shown above.
An amazing screening that 500 people attended.
They loved it and the festival organized that Yiddish Diva- Chayale Ash will come to the stage and do a Q and A with the audience.

At the same time, one of the largest Jewish Film Funds in the world sent us a letter informing us that our film was not selected to receive finishing funds. Funds that would have helped us a lot get our film out there in a better condition - fix some of the sound problems and have more funding for publicity. The head of that organization told me a year earlier, he thinks Yiddish theater is dead and there's no point in making a film about it.
I told him my film is not only about Yiddish theater. It's a film about the spirit of Jewish actors - and any actors. Mine was about some of the most colorful Jewish actors on stage today. People who survived the holocaust by working in their profession. The eternal wanderers. Unvelievable people who's story is that of survival. My film is also about growing old and still wanting to stay relevant. About being an older artist in a society that only worships youth.

So the film will not have the perfect sound. It will be what it is.
Even more painful is that once again, I will have to go at it alone.
As always.
Like the older Yiddish actress in my film said to me :
"Don't seperate yourself from the world. "

Unfortunetaly in Israel there's a war, so most of the critics in San Fran preferred to focus on political films about the conflict in Israel.
My film got no coverage in the press.

That said, I was on Channel 4, in a morning show, and was interviewed by the charming Jan Wahl.
I also got a small quote in the San Fran Chronicle.
I talked about my shame of some of the Jewish community members in San Fran who wanted to buoycott the festival because what Israel is doing in Lebanon and Gazza.
I didn't understand how Jews want to buoycott an ultra left wing film festival because Israel is trying to protect itself from over 100 missiles that are falling on their civilians daily.
Have some of the Jews in San Fran reached an all time low of self hatred ?

Like most of the people in the planet- I too had issues with self hatred. But I think I'm growing up.
I've realized that one cannot be loved by everyone, and so, one has to be careful from the haters. Those who hate themselves and fill us with hate as well.

That's it.
Onward with the fight not to seperate myself from the world.