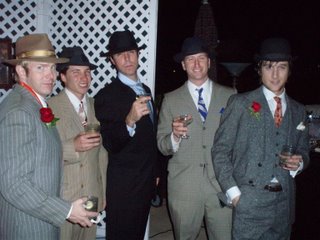 This weekend I went to a 1930's themed party in the legendary Hollywood towers.
It was unbelievable. Like entering a time machine into a different era. Everyone was dressed so perfect. You could see they had invested time both in researching and in finding the proper clothing for this occassion. There was a band playing 30's music, lots of champagne, and a women dressed like a street cigarrette seller, handing out free chocoloate cigars and cigarettes.

The two worlds I live in. On the one hand, a huge chunk of my heart is still in Israel. Reading the news. Watching on the CNN and Fox news websites the developing stories about the region. On the other hand I live in a city where people are constantly looking for new and exciting things to excite themselves.
Kind of crazy, how these two worlds are so different.

Seems like the Middle east is ruled by hatred. Ruled by lots of negative emotions.
Most of the energy of most of the people isn't towards making their lives better, but is condensed into hating one another.

Here in LA, everyone is living such a different life, not caring that much about anyone but themselves and their own goodness and well being, and in doing so, allowing their imaginating to work extra hours.

Can a man live in his heart in two continents?
I don't know. At the moment it seems hard. I guess like a person can't physically live in two places at once. Perhaps also the heart can't do so either.