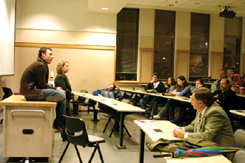 Another article, I'd like to remember to remind me about my trip to Cincinnati. From the Universities newspaper:

Filmmaker Dan Katzir visited the University of Cincinnati Tuesday for a screening and discussion hosted by the Hillel Center of his internationally renown film, Out For Love...Be Back Shortly.

In Katzir's film, he documents his pursuit to find love during the period of Prime Minister Yitzhak Rabin's end of reign and assassination.

After receiving his bachelor's degree from Tel Aviv University he studied at The American Film Institute to earn his master's degree in directing. Katzir also served as a lieutenant and paratrooper in the Israeli army. He says that his films are influenced by Russian art and prefers literature to movies for ideas.

At a young age he wished to make films filled with action and drama. However he soon realized that though he had a lot of anger inside him, he was "still an incurable romantic."

After finishing Out For Love in 1997, the film was taken on the road for viewing in 1999. It exposes the process leading up to and the courtship between Katzir and Iris, a young girl serving in the army along side Rabin's granddaughter, Noa.

Katzir made a point not to take a political view on the situation of the times. It truly is "just a love story," Katzir said. He expresses how difficult it was for him to articulate his feelings to Iris. "In my country it seems the only time people express their emotion and love is in large groups during ceremonies," he said. This was quite evident in the movie.

Out For Love is not for the faint of heart or weak of stomach. There are several graphic images taken from actual footage after terrorist attacks on his hometown.

A few parts of the film are a little slow and at times dry. A lot of it seems to deal with the inner conflict between Katzir and his issues with expressing his emotions toward Iris.

In the beginning his grandmother reveals a piece of her life that appears to be very difficult for her. She expresses emotions such as hope, despair, broken heart, desolation, misery and loneliness. She also tries to conceal these feelings by not allowing herself to discuss it.

The conflict between Katzir and Iris gets frustrating because it revolves around him attempting to tell Iris how he really feels. There are so many opportunities that you wish he would just get it out, but doesn't. The opportunity passes him by and lets the audience down.

Be prepared to read, though, because the film is subtitled.

In case you're wondering what happens to the couple in the film, they broke up. She did not enjoy all the attention that the film had attracted to their lives.

After the screening Katzir answered questions about the film.

"I don't know [what the general message of the film would be]. In art, you don't really know what you're trying to say," said Katzir. He prefers to let people view his films and gather from it what they can.

His views on life are that it is complicated, and rather than black and white, "it is many shades of gray."

Katzir has other movies along with a novel titled, Love Is Always the Answer. He is currently living bi-continentally in Los Angeles, Calif., and his home country of Israel. He has no plans for the future, other than "to find a girlfriend."

The Seattle American Jewish Committee says, "Katzir struggles with seemingly inescapable realities, as he yearns to find the peace within that will enable him to fully experience his life."�

Katzir is known for wanting to tell stories about love at any cost. His other productions will be at the Israeli Film Festival and should some make it back to the states for more international screenings they are worth checking out.