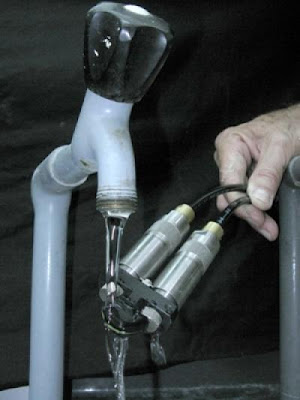 TAU physicist's 'infrared fibers' can defend water supplies from chemoterrorism
May. 19, 2009
jerusalem post staff , THE JERUSALEM POST
A Tel Aviv University physicist has developed a system to monitor the safety of a building's or community's water supply in real time, which could combat the threat of contamination due to industrial spillage, natural disaster or sabotage.

Although most people take the safety of their drinking water for granted, ordinary tap water could become deadly within minutes, says Prof. Abraham Katzir of Tel Aviv University's School of Physics and Astronomy.

Modifying special fibers developed in his lab, Katzir can detect "colors" in the infrared spectrum that distinguish between pure and contaminated water. Connected to a commercial infrared spectrometer, the fibers serve as sensors that can detect and notify authorities immediately if a contaminant has entered a water reservoir, system, building or pipeline.

In the lab, the fiberoptic system detected poisons, such as pesticides, in amounts well below the World Health Organization safety threshold. Preliminary field experiments have already been done at several European sites, and the results were reported recently in the Journal of Applied Spectroscopy.

Once in use, the sensor system would be one of the first real-time water monitors to provide protection from chemoterrorism attacks - a threat to which water supplies in places like the US are particularly susceptible.

"It's unlikely that someone will poison the water supply in Afghanistan," says Katzir, "but America is in grave danger and needs to arm itself against chemical threats to its drinking water.

"With our naked eyes we can't distinguish between pure water and water that contains a small amount of alcohol or acetone. They're all clear. We can't do it even with a spectrophotometer, which measures visible colors," explains Katzir.

The special fiber sensors make it possible to monitor the quality of water in a remote location, such as a lake, a river, or a pipeline, and detect trace amounts of contaminants in real time, adds Katzir.

Water management executives in Florida's Everglades and officials in Germany are among those who have expressed an interest in using the technology.

"Toxic materials are readily available as pesticides or herbicides in the agriculture industry, and can be harmful if consumed even in concentrations as low as few parts per million," says Katzir.

Cities like New York are especially susceptible to a chemoterrorist threat. With many skyscrapers holding water reserves on the top of the building, a terrorist only needs to introduce poison into a tank to wreak havoc.

"A terrorist wouldn't have to kill tens of thousands of people. Only 50 deaths - as horrible as that would be - would cause nationwide panic," Katzir says.

Currently, water authorities in America test water reservoirs usually once every day or two, with no system in place to detect chemical threats instantaneously.

"This new system can cut millions of dollars from the cost of testing water manually," he says,

The fiber sensors developed by Katzir are made of insoluble, non-toxic, and biocompatible materials.

"You can eat them and nothing will happen to you," he notes.

Katzir's determination to fight terrorism through science has a personal side as well. His father, world-renowned scientist Prof. Aharon Katzir, was assassinated by the Japanese Red Army in a terror attack in 1972.

"I am trying to walk in his footsteps by doing applied research that can be a practical tool in an important battle," he says. "This system can be ready for use in less than a year."
- May 20, 2009