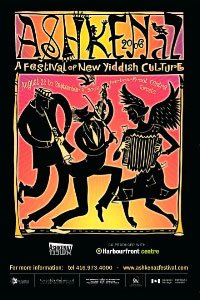 Here's the link to the screening:


The film is starting to Travel. Hopefully, after the Northern Neighbour, we'll start touring the world.

Still no one in NYC wants to see the film about saving a culture in NYC.

Will this film travel the entire world, before finding a space in NYC ?

As Gov. Pataki opened the movie by saying : " Hitler tried to destroy a people and their culture" he failed at both.

Hitler failed at killing the people, but he did succeed in killing a culture. At least the Yiddish culture and Yiddish theater in particular.

As we're starting to travel the world- I'm starting to regain my confidence, which I lost a little bit as I was finishing the film.
I'm remembering why I made this film.

Perhaps it's not the most commercial project. But it's a very important project, which I'm very happy I did.
It's one of those small, labor of love projects, which remind you that there's stuff worth fighting for.

Onward with the battle to make the world a better place.