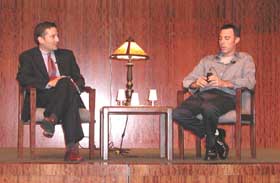 In the pictures :
Rabbi Wolpe interviews me after the screening of my film at Sinai Temple. Los Angeles, Tu Baav.

Life in the age of connectivity.
Someone asked me if I have a picture of myself, and if I could email it to them. I told them there are quite a few out there on the web.
But then I realized that indeed there are two problems.
1. There's another Dan Katzir, also living in LA, but with a different fate than mine. So I might be confused with him, once again.

2. Some of the newspapers that once printed pictures of me, eventually move them to the archive files, and the text is still online, but not the picture.

So I realized it's important to somehow find a way to keep alive those pictures I liked that have been living on the web for some time, so that I can enjoy the memories behind them also in the future.
I had been in many events over the course of the alst few years and yet sometimes, you need to see an image of a certain event to remember how much fun it really was.
One of those ultra cool events which is very memorable to me is the event at Sinai Temple, one of the biggest, dare I say THE biggest temple in LA.
Hundreds of young people showed up to see my film there, and afterwards I had a talk on stage with Rabbi Wolpe - one of the most influential Rabbi's in LA.

It was on Tu Baav- kind of like the Jewish Valentines day. After that event for weeks, I met young people who told me they had found love and/or their boyfriend/girlfriend in my event.

Back in the day, on Tu Baav, girls would wear white and go dance in the fields. The boys would see them and choose their wives.
I wonder if anyone got married thanks to that event?
Hopefully one day someone will tell me I was a little help in their quest for love.
Back in the day, I remember seing a few pictures of that event online.
Today there's only one left.
There used to be more mentions of that event online.
Memory is still a problem today, so some of the typed memories have been washed away deleted into oblivion.
Luckily there still lives online some thoughts about this event.
I chose two. One by a blogger who had a funny point of view on that event. The other by the official Jewish organization in the city.
Here's the first metioning of that event on the web.

It's by someone named Luke Ford who wrote about it in his blog :
(http://www.lukeford.net/archives/updates/030816.htm)


Out For Love...Be Back Shortly

Wednesday night marked the festival of love in the Jewish calendar - TuB'Av. Being a pious Jew, I showered, put on some nice dacks and made my way to Temple Sinai in Westwood.

A large crowd was already gathered at 7PM as I lined up to buy my ticket. The staff were running out single dollar bills. The attractive lady taking my money was someone I've dated in the past year and could date again one day.

I find ten singles in my wallet and I keep digging. Finally, 13 singles and a $5 bill. I push the money towards her. I'm closing my wallet when a Trojan condom falls out on the table.

Blushing, I grab my rubber and stick it in my pocket, seeking a rationale for what just happened. It is the festival of love, after all, and one should be prepared. Stranger things have happened after Rabbi Wolpe has given one of his eloquent sermons about expressing ourselves Jewishly.

Perhaps I'll start a cultural trend. Soon men will indicate their interest in a woman by discretely dropping an extra-large ribbed condom in front of her.

My older Israeli friend Eitan grabs me and pats my stomach. "You're getting fat," he says. "Soon you'll look like the rest of us."

I find a seat far from the rest of the crowd (which will grow to 300) and read my book on literary feuds.

Restless after a few minutes, I have to walk out past the new assistant rabbi.

Luke: "Are we allowed out? Wait, you're a Conservative rabbi. You believe in the spirit of the law vs the letter of the law. If you were Orthodox, no way out.

He lets me out.

Rabbi: "Did you say a blessing?"

He starts me with the Hebrew phrase and I finish it.

Rabbi Wolpe introduces Dan Katzir's film - Out For Love...Be Back Shortly, which garners this deserved review on imdb.com:

Dan Katzir has produced a wonderful film that takes us on a roller-coaster ride through a real romance set in the troubles surrounding modern Israel. For anyone who's ever been in love, the film brings back the uncertainties, the insecurities and heartache that make love so bitter-sweet.

The atmosphere of fear and isolation that came with the difficult times in Israel at that time just serve to intensify the feeling. Instantly, you are drawn in to Dan's plight, and you can't fail to be deeply moved.

You can't write drama and passion like this - the contrast between the realities of Dan's desperate, snatched relationship with Iris, and the realities of a state in turmoil make this eminently watchable. If you have an ounce of passion, and have ever been in love, see this film.

During question time, we find out that publicity over the film drove the couple starring in it apart. Iris appears a lovely sweet feminine beautiful girl who becomes an officer in the Israeli army. She has since married and divorced. Dan has yet to marry.

The cell phone of the woman next to me goes off during the discussion. To my horror, she answers it and starts talking. I shoot her a homicidal glance along with a dozen other people.

"Turn it off," I hiss. I find this appalling manners, and I have very few of those.

She hangs up on her call and turns off her phone. On Friday night in shul, she started taking notes on the rabbi's sermon. I wanted to grab her pen and stab her with it.

"You can't write on Shabbos," I hissed.

It is against Jewish Law to write on the Sabbath. This does not bother me so much in the abstract when Jews do it. It freaks me out when it happens in a traditional synagogue on the Sabbath right next to me. There's a big difference in Judaism between sinning privately and sinning publicly. When you sin publicly, you challenge the moral foundations of the community and drive out the divine presence.

To comfort myself from all this wickedness Wednesday night, I make for the desert table and scarf down several pastries and pieces of fruit. I grab a napkin and wipe my hands and face.

Two girls next to me: "We're going to have to start charging you for those."

Women, they're always taunting and teasing me. Won't they learn to respect the man, even when I drop my rubbers in front of them?

Why Are There Fewer Marriages?

Here's what the official Jewish websites in LA Wrote :

Tu B'Av, Out for Love…Be Back Shortly

Young professionals took a break from their busy lives to attend a screening of the award-winning film, "Out for Love…Be Back Shortly." In addition, they had the opportunity to meet the man behind the movie, Dan Katzir, and participate in an open dialogue with him and Rabbi David Wolpe.

Israeli filmmaker Dan Katzir's docudrama, "Out for Love…Be Back Shortly," about an ordinary young couple's quest for love in extraordinary times and set against the time of Prime Minister Yitzchak Rabin's assassination, has won 13 International Awards. Rabbi David Wolpe, senior rabbi at Sinai Temple, author and renowned contributor to numerous major publications, is one religious leader who can always be counted on to offer valuable insights into Judaism that seem to resonate with today's young Jewish professionals.

ATID, which means "future" in Hebrew, is a new program of Sinai Temple that seeks to connect young Los Angeles Jews and provide social opportunities, while fostering a deeper engagement with their Judaism through a variety of innovative and exciting programs and events. For more information, call (310) 481-3244

The Jewish Federation's Young Leadership Division is a dynamic group of people – ages 20's to mid 40's – who are committed to building a stronger Jewish community through community involvement, education and fund raising. For more information, call 323-761-8248 or visit the Young Leadership Division´s web page at www.jewishla.org/html/younglead.htm.