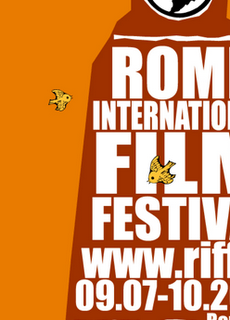 Today we had Another great screening in the bible belt. Rome Georgia.Thanks to all the good people in Rome who selected our film. I'm so excited when my films play in places I fear I'll never have the oppurtunity to travel to.
Even if my body can't travel there, at least a piece of my soul can travel to. Even if I won't get to meet the wonderful people of Rome, I hope they will like the piece of me that I've sent. A piece of my heart, about the passion to live of a 90 year old woman, who's not willing to give up. A 90 year old woman who finds a reason to get up every morning and go to work as an actress.
It's my love story to people who want to live and have meaning to their lives until the day they die.


Here's the link to the Festival's screening :

For all those who don't know that much about Rome, here's some info :

Located as a center point between three metropolitan southern cities, Atlanta, Chattanooga, and Birmingham, Rome is rated among the best places to live, work, and do business in America.
Floyd County was established in 1832 and named in honor of John Floyd, military officer and member of the state and U.S. House of Representatives.

In 1834, two weary travelers stopped to rest beside a spring near the junction where the Etowah and Oostanaula rivers form the Coosa River. They and a third wayfarer decided the area was ideal for a town. Its abundance of water, heavy growth of timber, and its obviously fertile soil favorably impressed all three men.

Following a night of southern hospitality at the home of Major Phillip Hemphill, the three men enlisted the aid of two others in developing plans for the new community. Ferry rights were obtained, land lots and street plans drawn, and provisions were made for public buildings. Legislative and legal actions designated the site as the seat of Floyd County and a city was born. All that seemed lacking was a name.

Each of the five men wrote a suggested name on a slip of paper and deposited it in a hat. Drawn was Daniel Mitchell's proposal, "Rome." Rome's topography reminded Mitchell of the seven hills of ancient Rome in Italy. In 1929, Benito Mussolini traveled to Rome and presented the City of Rome with a sculpture of the Capitoline Wolf and her adopted babies – Romulus and Remus.
- September 08, 2006