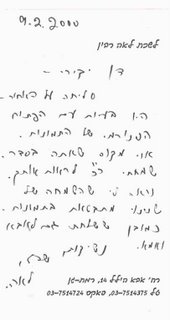 11 years to one of the most painful days in my life. The day my prime minister- Yitzchak Rabin was assassinated in the square near my home in Tel Aviv.

The death of Rabin, to my generation was a defining moment. A moment that changed not only the politics in our country, but also killed some of our innocence.

I had the fortunate to meet his wife, Leah Rabin, and become friends with her after my film: " Out for love...be back shortly" . came out. A remarkable woman.
A truly larger than life character.
When I was studying in L.A. she visited me. We had lunch in the same hotel where Pretty woman was shot.
Yes, I know it's shallow to remember a meeting with a great person, by a movie shot in the same. But still, this is not any movie. It's PRETTY WOMAN.
Even Leah Rabin, afraid I might not have known this info, had to mention it.

There's something that always amazes me, in those things that stand out and become Iconic. Leah and Yitzchak Rabin, were iconic. They were both larger than life, and Leah had the oppurtunity after Yitzchak Rabin died, to show the public who she really was. Regardless if she was liked or hated, by certain crowds, she was always respected.

Pretty woman, was also more than a film. It became a cultural phenomena. Regardless if one hates that film or loves it. Everyone has seen it, almost everywhere on this planet.

Anyways, 11 years since our prime minister was murdered. His assassin was allowed to make a child with his new wife.
History has a way of being so unexpected.

Is the world a better place, since he died? Is the middle east a better place since he died?
In the last week 49 Palestinians have died. One Israeli soldier has died. Lots of Kassam missiles were shot on Israel. Hammas wants to escalate the war against Israel and ISraeli's. The Israeli army is escalating the war against terrorism.
The left wing leaning Haaretz newspaper writes that the Israeli army is preparing against a war with Hizballah, the Lebanese terror organization and it's backer Syriah in 2007.
The chief of staff decided to keep the mandatory army service in Israel at 3 years. Just a year ago, they passed a law to reduce it by 8 month or so.

What will the future hold?

What will happen in the 15 year anniversery to our beloved prime minister's death?