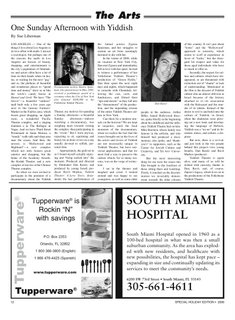 Amazing review of the Yiddish film in the NATIONAL JEWISH PRESS.
"I SAT IN THE THEATER AND LAUGHED AND CRIED" wrote Sue Liberman.
Thanks you Sue for the wonderful review.
Seems like all the stuff I do make people laugh and cry and yet, I can't persuade yet the powers to be, to let me go to the next level. Make a full fiction feature.
Perhaps cause my docs, aren't in a particular genre. They're not funny enough, nor sad enough. They walk that fine line in between combining humour with sadness- like the Yiddish theater's sensibility- laughter through tears, tears through laughter.

What can I say.

It's like I feel I have this very old sensibility, that derives from my old soul. The world is moving forward at 75 miles per hour, and yet I'm moving so slow. Then again the world is round, so that hopefully I'll catch up with everyone else, when they'll be in their second round.

Last night, I discovered that one of the most popular videos on YOUTUBE.COM was made by two Israeli's.

It's gotten 10 million views. It's their version to the Pixies video of HEYA.
Even Kevin Smith did his take on it.

I looked, and realized there's some things I guess I don't get.
Then again, maybe Kevin Smith was trying to say that he didn't get it either.
I don't think the two girls who did it, got it either. That's why they later did another video thanking the ten million people who watched it and commented on it.

Then again, maybe no one gets it. We live in a new world- where the random factor is greater than it ever was before. A world where something might become a fad, almost arbitrarily. It's not just about the money and the publicity. There's a much greater oppurtunity - at least in theory, as the internet is still unregulated, and still a great frontier.

Lastly, the thank you video by these two girls to their fans. It's a new world out there. I know in a few years, I'll read these lines and won't understand what the big deal is. But right now, it all seems so wierd. A world where everyone's communicating with everyone else, visually over the net, is so new and groundbreaking.