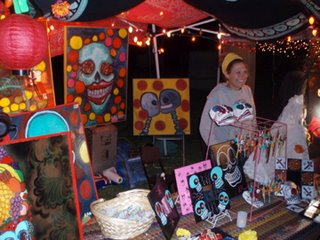 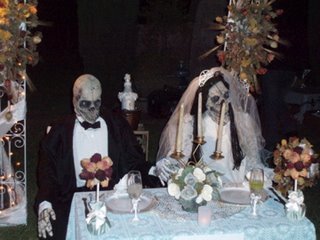 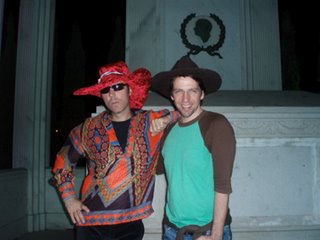 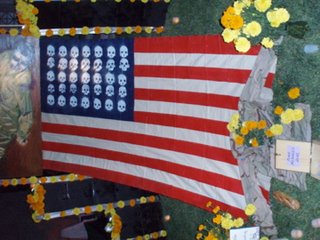 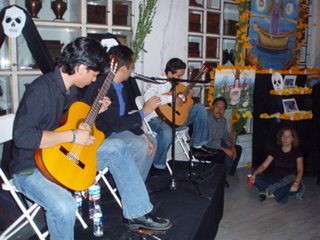 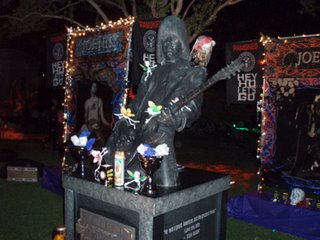 A long Halloween weekend in a city where everyone's in costume most of the year anyways.
Nothing interesting to report about the parties. But I was in a very unique event.
I went to the hollywood forever cemetery (http://hollywoodforever.com/)
where thousands had come to celebrate with the dead. A very unique holiday celebrating the dead. Fans built all kinds of interesting things on the graves themselves.

Suddenly death was less scary. It was fun, it was joyous. It was wierd how different cultures perceive death differently.

Death is always painful. But this holiday tried to make it a little more accessible.

A holiday celebration in a cemetery.

Only in Hollywood forever cemetery.

Some info about the event that was on Oct 28 2006 from the Hollywood forever website:

Celebrating our 107th year anniversary as Los Angeles's oldest memorial park, Hollywood Forever welcomes the City of Angels and beyond to commemorate our 7th annual Dia de Los Muertos. Be our guests as we welcome, honor and celebrate the memories of the beloved souls. Join us as we rejoice and observe the mystical beauty and wonder of this ancient spiritual celebration. Partake of various sacred ceremonial tributes and memorable altar creations on the grounds of the historic Forever cemetery.

Dia de los Muertos at Hollywood Forever cemetery was originally envisioned for the purpose of providing an authentic venue, in which this ancient tradition could be genuinely observed, celebrated and preserved. Tyler Cassity and Daisy Marquez conceived this festival of life as a platform which would synthesize creativity for the means of remembering the departed spirits of our lives. This event has provided a gateway for those who wish to re-acquaint themselves with their deeply rooted traditions and profoundly engage with one of the most devotional celebrations for the continuous cycle of life.

At the heart of this sacred event are the meticulously individually crafted altars and spiritual shrines. These dazzling private tributes and offerings which provide a linkage between ancient traditions and modern customs chronicle the perpetual relation between faith, family and history. Representing and understanding the vitality of this ancient custom, Celine Mares conceptualized the necessity of incorporating this enigmatic mystical custom to thrive within the realms of the Forever cemetery.

Interwoven into this effective visionary ensemble lies the creative commitment of Alberto Hernandez, who has continuously maintained and strengthened the core foundation of this uniquely inspired event through providing a linkage and emerging bond with the many culturally mindful artisans from our diverse community.

In the spirit of the goddess Mictecacihuatl, known as the “Lady of the Dead,” and Samhain, the Celtic day feast of the dead, Hollywood Forever has engrained and developed a much desired and appreciated emotionally driven chord with its surrounding community. On the eve of the 7 th year anniversary of this benevolent observance Tyler, Daisy, Celine and Alberto continue along with countless committed volunteers and artisans to call upon the living to engage and summons the spirits of our lives who shaped, inspired and left their prints engraved in our souls. By providing our community with a genuine setting to learn the importance and significance of this celebration, the original objectives of the founders have been realized and internationally recognized by “tens” of thousands of new and returning faithful visitors who have been continuously welcomed as guests and interactive participants to this annual and growing community based festivity.


Our Spirit of Culture

Home to the oldest memorial park in Hollywood dating back to 1899, Hollywood Forever is the only cemetery in the country which opens its gates and welcomes its surrounding community to commemorate El Dia de Los Muertos. Hollywood Forever is genuinely focused in striving to bestow a memorable occasion by embracing the celebratory process of death and dying through providing a historically recognized cultural setting for this festive event and sacred observance. This community based event encompasses and visually illustrates a Pre- Columbian ancient jovial traditional view of death with a modern eclectic celebratory observance.

Dia De Los Muertos is one of Mexico's traditional holidays reuniting and honoring beloved ancestors, family and friends. It is an ancient and enduring ritual when the living commune with the dead – a mystical night when the veil is lifted between their two realms and they may share a day together.

The historical roots of this celebration date back to the pre-Hispanic cultures of Meso-America of the indigenous people, especially the Nahua (Aztecs, Mayans, Toltecas, Tlaxcaltec, Chichimec, Tecpanec) and others native to Mexico more than 3,000 years. When the Spaniards conquered the country, this indigenous custom was rooted so deeply that, after five centuries of colonization, it has continued to survive and remain as celebrated as in its first days.

Throughout each period in Mexican culture, death seems to hold no terror. In Mexican art, legends, and religion, death has not been a mysterious and fearful presence but a realistic recognizable character as much a part of life as life itself. Dia De Los Muertos expresses this perspective: it is not a mournful commemoration but a happy and colorful celebration where Death takes a lively, friendly expression and is not frightening or strange. There is no place for sorrow or weeping for this could be interpreted as a discourteous to the dead relatives who are visiting gladly.

Indigenous people believed that souls did not die, that they continued living in Mictlán (Place of Death) a special place for them to finally rest. On Dia De Los Muertos, tradition holds that the dead return to earth to visit their living relatives. It is believed that although these relatives can't see them, they can surely feel them.

This night is an important feast and evocation. It is a time when family members share memorable stories that evoke the lives of their ancestors . Offerings and altars are created to welcome and commemorate the dead. Marigolds and incense are offered in abundance because it is believed their aromatic scents guide the dead to the place where the feast is being held. . A profusion of candles dispels the darkness just as the souls are being illuminated from the shadows of death. Altars are created with photos, mementos, fruit, bread, and other favorite things of the ancestors being welcomed and honored. The artifacts of these altars also provide the opportunity to teach children about those who came before them.

Dia De Los Muertos is a time of celebration on remembrance. It is also a time to come to terms with our mortality and become aware of the cycle of life and death. Rather than deny and fear death this event teaches us to accept and contemplate the meaning of mortality.


“Life is a great surprise. I do not see why death should not be an even greater one.”
Vladimir Nabokov