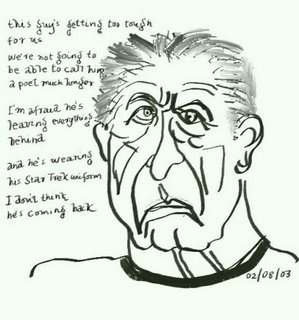 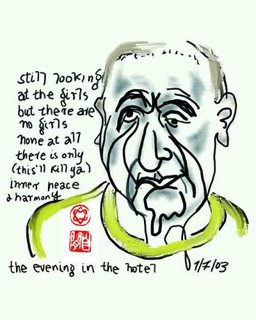 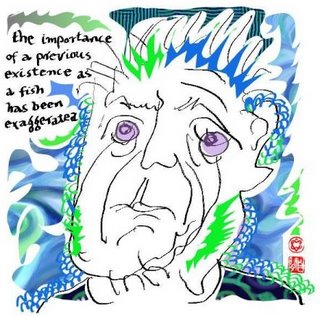 Back to one of my favorite singers. My friend Inon, a huge Leonard Cohen fan, emailed three pictures he thought I might enjoy, drawn by Leonard Cohen himself and well, they're pretty crazy.
Inon knows I'm also a Leonard Cohen fan. Not as devoted as him, but I still care, so he emails me from time to time new info he's found online.
I'm not much of a fan. Don't know why, beyond loving someone's music, I don't bother to learn more about the artist behind it. I accept it for what it is. But luckily I have friends who are always out there to assist.
Talking about Leonard,
Lately Inon emailed me a myspace link to a singer called Anjani. It sounded like Leonard Cohen reincarnated as a woman. I told him it sound like some lady singing an unkown Leonard.
He told me Leonard wrote the songs, and she borrowed them from him.
She's been collaborating with him for over twenty years.
Inon, was the only leonard Cohen guy fan I've ever met in LA. I've met a few female Leonard Cohen fans, but they were all nuts.
I have a Leonard Cohen test. When a girl usually tells me she likes Cohen, I usually know she's a little distrurbed. Don't know why.
That said, I guess guys who like Leonard, must be also a little ... you know... disturbed.
Maybe I'm also a little disturbed, if i like him.
That said, maybe we're all disturbed.
Then again, the way he draws himself.. you know...disturbed.
Check out Anjani on my space and her amazing record : Blue Alert
http://www.anjani-music.com/
http://profile.myspace.com/index.cfm?fuseaction=user.viewprofile&friendid=72533035

Fo all those who still think a previous existence as a fish has not been exaggerated.