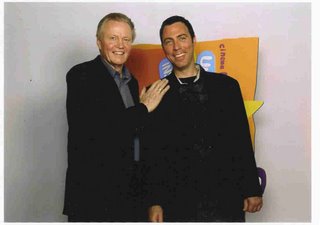 In the picture above : Actor Jon Voight and me at the Giffoni Hollywood film festival closing night at the Kodak Theater.


The Giffoni Hollywood Film Festival came to its finale today at the Kodak theater in Hollywood, the same place the Oscars take place in.

For all those who don't know about the festival, here's a link to it :
http://www.giffonihollywood.com/

It's a very unique festival. A festival for kids, by kids, judged by kids.
It started in Giffoni Italy, and now, several people have brought it to Hollywood.

Lots of great people are involved including Will Smith and Jon Voight.
My friend Shaked exposed me to it, as he's the programming director of it.

Kids from around the world were flown in , to learn about each other's cultures and cinema.
I saw an amazing film there : IN THE ORANGE
http://www.giffonihollywood.com/html/screenings_reach_the_sky.htm#orange

A long time has passed since I saw a movie that made me cry. I cried like a kid there. It was so emotional . So beautiful . so touching. An amazing story about the love of a father and his son.
Sometimes I ask myself what am I doing in this crazy business of filmmaking. But from time to time I see's a movie like this one that reminds me why I chose this tough profession. There's nothing like suddenly being exposed in a dark theater to the magic of cinema.
That magic usually doesn't happen. But sometimes you sit in a dark room and that magic happens- and it is...
Well magical...
More about the film :
In Orange (2004)

Synopsis
Remco, 12 years-old, is a fanatic little soccer player with only one dream: to play in the Dutch national team. He is the top scorer of his team and insiders predict a great future for him. Erik, his father, is possibly even more fanatic in coaching Remco and convinced that he can make it to the national team. But Remco's world falls apart when his dad unexpectedly dies. Now Remco, his mother and his sister have to cope on their own. Remco misses Erik so terribly that he doesn't feel like playing anymore. Not even when he is invited to play for the regional team. One magical evening Remco meets his father's ghost who has come to train him again
- April 29, 2006